Online Gaming is nothing new, we’ve been gaming since the mid 1970’s. While both the industry and gamers have been growing and evolving for over 40 years it’s only in the last few that online gaming has moved into the mainstream. This rapid rise in the recognition of gaming as a legitimate and extremely popular activity is starting to catch the attention of marketers – creating a desire to better understand gamers, the environment and the opportunity for brands.

Every gamer has their preferred console, the “debates” between PS and XBox brand loyals could start war games ( only online ones, of course) but there are also many online gaming platforms. With their varied specialisations and integrated mixes of gaming functionality, social media, live streaming, live chat, ecommerce and highly active, connected online communities, the likes of Twitch, YouTube Gaming, Steam, Caffine, Stream.me, Smashcast TV and more are growing not just in features, games and audiences, but in participation. For brands the varied application and uses, unique communities, rising influencers, content creation and sponsorship opportunities open entirely new virtual worlds to explore, and expand into.

Although it’s not so well known, even Facebook has been in the gaming space since 2018. In a clear attempt to take on the competition, in November 2020 the platform added the gaming tab to our Facebook dashboards. Making Facebook gaming more visible and easily accessible is a clear move to grow its gaming audience, regain the attention of younger users, and keep gamers of all ages on Facebook longer.

It’s an interesting move by Facebook, and it shows a strong understanding of not just their own audiences, but of who gamers really are. The traditional perception of gamers is one of mostly younger men in their teens and twenties- the awkward or antisocial geeks and nerds locked up in their bedroom living a fantasy life online. It’s doubtful that gamers ever lived up to the stereotype, and today’s gamers definitely don’t. They are as diverse, different and surprising as the world we live in. 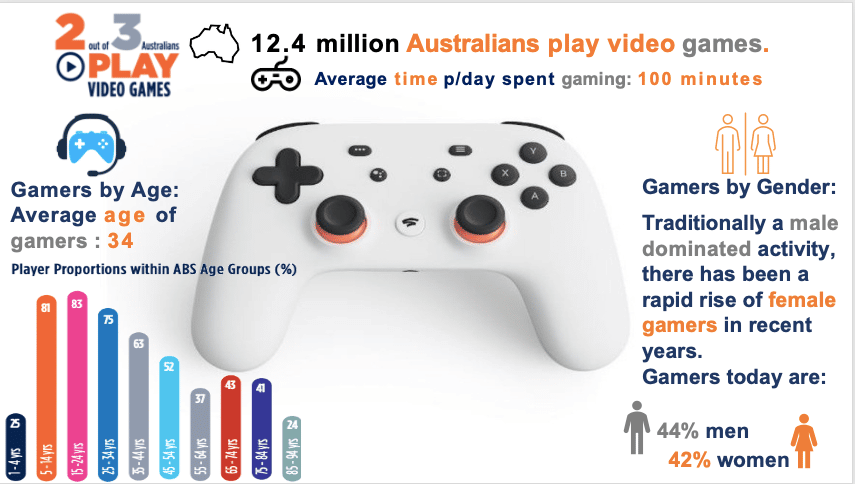 Gaming may be built for fun, and there may be games to capture the interest and imagination of almost everyone, but it also has surprising applications across industries including healthcare – in the treatment of dementia patients – education and tourism. 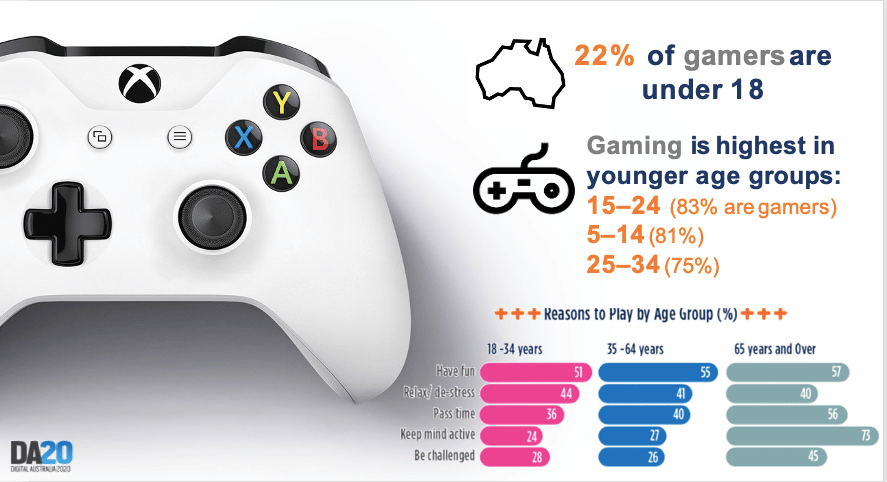 The rise of esports

Fun and relaxation may be the main reasons gamers love to game, but online gaming is also a globally recognised, professional competitive sport. It even has its own elite, high profile events that could compare to the Olympics. Known as eSports, professional gaming tournaments are held regularly around the world. Esports (also known as electronic sports, e-sports, or eSports) is a form of sports competition using video games. Esports often takes the form of organised, multiplayer video game competitions between paid professional players, individually or as teams. These professional players have all earned their seat at the championship console, and are all competing for the win – and the significant rewards that come with it.

Esports may not look like the sports we’re familiar with, but it mirrors traditional professional sports in almost every way. Tournaments are fiercely competitive, attract the best professional players from around the world, are held in arenas sold out to audiences in the thousands, attract even bigger global audiences watching live online, prize money is high, events are supported by strong brand partnerships, professional gamers attract brand sponsors, and the best are as famous, wealthy and influential in their world as any professional sports player.

Over the past few years gaming has become a legitimate career path, with eSports offering the potential of fame and fortune. eSports has evolved into a multi- billion dollar industry, followed by millions of diverse fans spanning every corner of the globe. With active participation and strong support from brands that include tech innovators, healthcare, top-tier universities and many other industry leaders, expanding media attention and niche publishers, and of course the growing number of gamers being attracted to the play, gaming and eSports are fast becoming an extremely powerful force – making it a powerful playing field for marketers.

In some ways online gaming may already be more powerful than many traditional sports. Australian’s love our football, no matter which code or team has your heart, but when comparing the playing fields, neither the AFL nor NRL can compete with the reach and potential of eSports.

Both the online gaming environment and the gaming community are unique and very different to any other marketing channel. Online Gaming is new, uncharted territory for brands (outside of the gaming and tech industry), but some are beginning to experiment and find the potential – exploring the industry with campaigns, influencer partnerships, and other activities to gain a deeper understanding of the space.

Highlighted below are two very different brands with two very different online campaigns. This brief introduction to the potential gaming offers shows both the diverse opportunities in gaming, and how the thinking and approach has to be as unique as the environment itself. 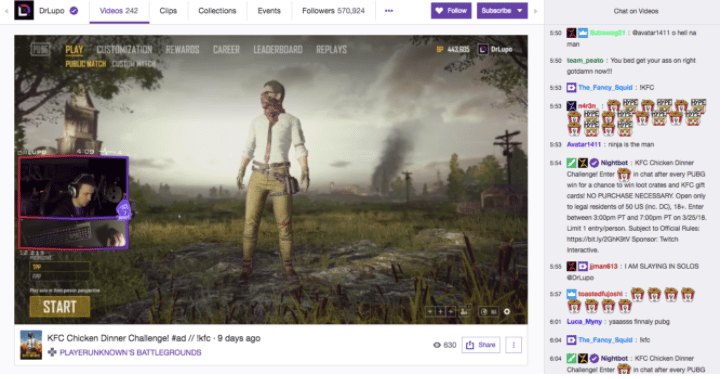 Lupo teamed up with fellow Twitch influencer Anthony Kongphan, integrated KFC branding and the giveaway competition into the pair playing the popular game PlayerUnknown’s Battlegrounds ( PUBG), and held a KFC sponsored livestream of them playing with an audience of gamers watching online.

To ensure transparency, Lupo discussed the partnership with KFC and the competition at the beginning of the stream, before starting the game. 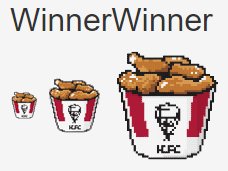 To enter the KFC gift card giveaway, viewers were to type the phrase “winner winner” in the video chat each time Lupo and Kongphan won a PUBG round. 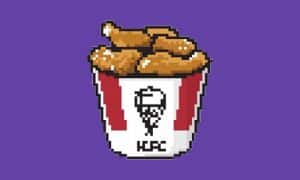 To maximise brand awareness for KFC during the livestream, Lupo regularly mentioned and referenced KFC directly. He also used humour to integrate KFC branding into the conversation –  known tag lines, brand phrases like “Gotta get that chicken. KFC! KFC!” and other commonly known KFC brand terms and triggers.

KFC’s campaign partnership with Twitch and Lupo demonstrates the brand’s awareness of, and openness to, the gaming environment, and the potential value it can offer. The campaign develops a connection between gaming and KFC, while the integrated, tailored approach and positive experience helps to establish trust and permission among the gaming community.

The integration of the PUBG game into the campaign was a clever move. PUBG has a natural connection to KFC through it’s well known catchphrase ““winner winner chicken dinner,”, and the decision shows KFC has an understanding of and respect for the unique behaviours, language, interests, trends and expectations of both gamers, and the broader gaming environment. 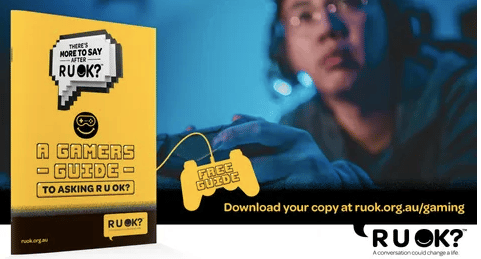 R U OK? – Notice When They’re Off Their Game

The goal of suicide prevention charity R U OK? is to empower and encourage all Australian’s to have more open and regular conversations with the people around us, to reduce the impacts and instances of poor mental health and suicide in the community. For R U OK? Day in 2019, the brand partnered with GoTo.Game to take the conversation, tools and messages into the gaming community.

The Campaign: Notice When They’re Off Their Game 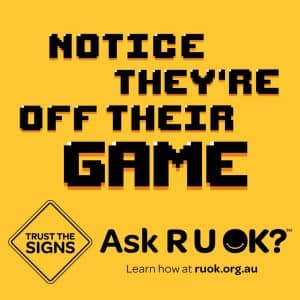 The campaign goal was a fairly simple one, encourage and start meaningful conversations and share resources and information with gamers on R U OK? Day.

Goto.game engaged Influencers across Twitch and other gaming platforms, and brands from across the gaming community, by simply inviting them to participate in the campaign. The ask for R U OK? Day was that they actively create these more meaningful conversations in their streams on the day.

Mental health conversations can feel challenging, so the message to gamers was simple – Notice when They’re Off Their Game

Mental health conversations can be sensitive and challenging, so expertise and support were integral to the efficacy and safety of the campaign.  R U OK? supported influences by having a presence in their streams all day, and were ready for anything from starting private chat sessions with gamers who wanted to talk one on one, to sharing resources and guiding in stream conversations to ensure they were valuable and safe for everyone in the room.

Notice When They’re Off Their Game: Campaign Wrap 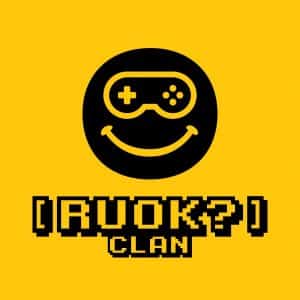 The R U OK? and Goto.Game campaign partnership created hundreds of conversations, lead by gaming influencers starting conversations and encouraging connections that were new and different from their typical livestream chat. Although a first for the gaming industry in Australia, as gamers began to feel comfortable in the conversations more and more stories, experiences, questions and support for others were discussed and shared, both publicly in livestream chats and in more personal one on one private chat.

The campaign and outcomes were so successful that R U OK? expanded the support for gamers, developing a tailored resource Hub and activating multiple campaigns in gaming for R U OK? Day 2020. 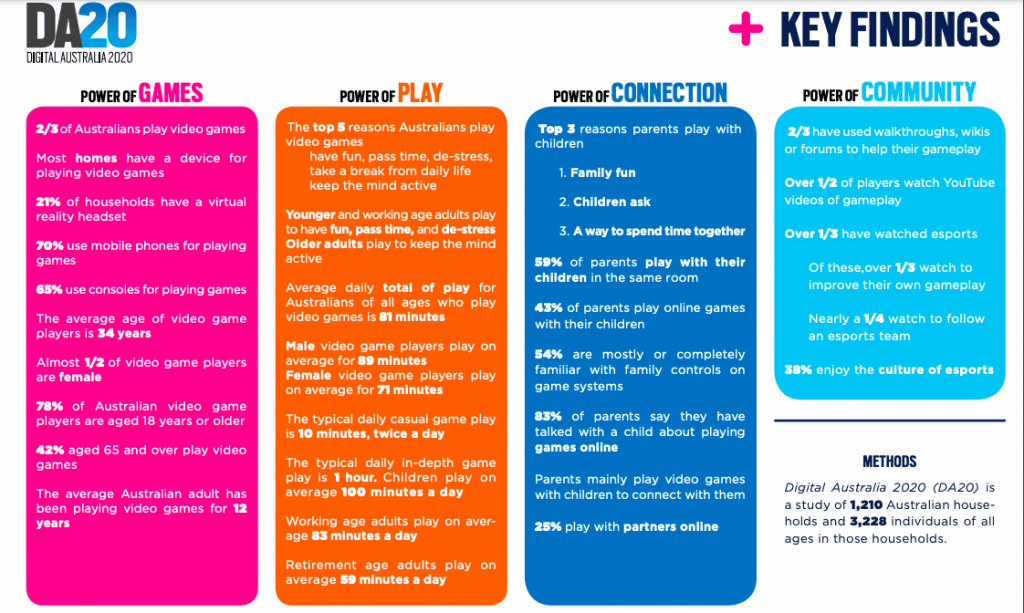 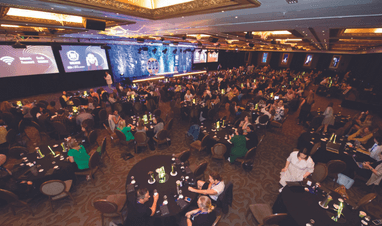 10 years of Google Ads knowledge condensed into one day 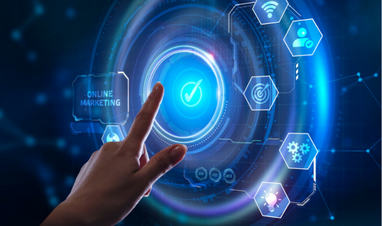 Lead generation is the process of attaining interest in your products or services. Leads can have...